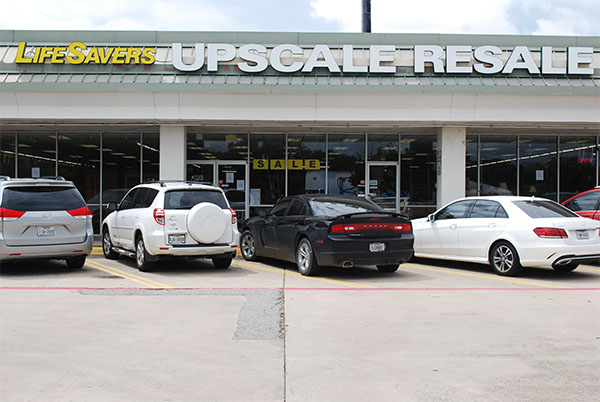 Ever think what kind of stories come from the items donated at your local thrift store? Here’s a story you soon won’t forget from Upscale Resale’s Assistant Manager, Becky Ellerman. We’re here to share the love of God with these people and to help them to, as they place their donations, just to meet them where they are. There’s a lot of stories about why people bring donations into the store.

Because we’re a nonprofit and we receive donations from generous givers, then what’s really neat for customers sometimes is they don’t even know where this money goes. They don’t even know what it’s for. It’s really fun for us to be able to share with them that the proceeds of this ministry, and everything that happens in Upscale Resale, goes to help support women and children in ministries across the city and also The Doctor Spot, which is incredibly exciting.

Recently we received this old-timey telephone and it was from 1910 and it was really cool. It wasn’t operational, but I had a woman within 24-hours come up to the counter and she laid it on the counter. What’s so fun about it is, it’s just like “Okay what are you gonna use this for?” because it’s all about repurposing something. It’s so much fun to see people do that.

Anyway, she then told me that she works at an assisted living center just around the corner from here. They have these rooms called memory rooms and it helps them to recall earlier times when their memory wasn’t impaired. And she said, “You just won’t believe it! You play music and they can remember it. You bring a telephone in there and, all of a sudden, they’re back in that mindset and then they feel empowered and families can come speak to them”. So that is without a doubt, the best repurpose story I’ve heard so far.